Two for two on Apple day trades as well, and I think Goldman Sachs may be up to something fishy right now…

Subject to quite a bit of skepticism, this exact scenario actually happens quite a bit…

Nio Incorporated (NYSE: NIO) is up about 100% over the past 30 days. Unless the company internally implodes or markets crash, the sky seems to be the limit for this electric car company.

But what if some financial professionals missed out on any bullish profits on NIO’s massive spike over the past 30 days or simply want to make the same money twice? What are they supposed to do in order to be offered another chance at making some money on NIO themselves?

Now, I’ve said this before and I’ll say it again… Financial professionals can move markets with one click of a mouse or by issuing one press release.

And the fat cats at Goldman Sachs did exactly that about 22 hours ago by issuing a downgrade on NIO. The stock instantly dropped 4%.

Just yesterday, option players came in and bought $104k worth of call options on NIO, anticipating NIO’s price-per-share rallies to $7 or higher by tomorrow’s closing bell.

Did Goldman knock NIO’s price down only to pick it right back up at a discount? It actually happens pretty often, and we may be seeing that exact scenario play out on NIO right now. 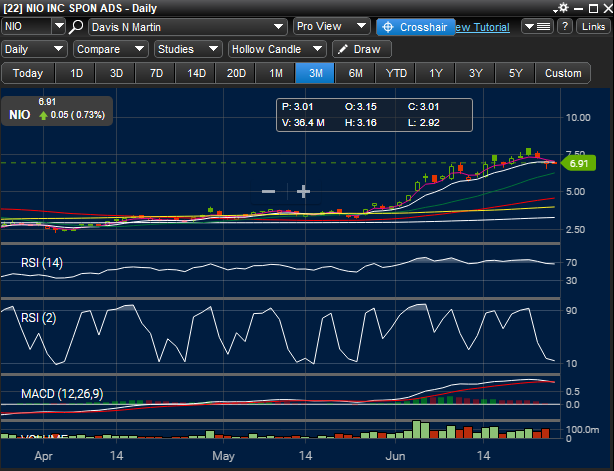 While moves of this nature do come with some skepticism from retail traders who cannot manipulate a stock’s price-per-share and move money in or out of it at will, I don’t really care too much…

I’m just looking to make a move or two on NIO in the hours or days ahead and make some money on it myself.

Shown in green in the chart above is NIO’s 20-day simple moving average line (20 sma), a critical support level. If NIO holds, I may buy call options alongside yesterday’s $104k option player for a fast-moving trade opportunity.

Below NIO’s 20-day simple moving average line and I’ll follow the money flow prior to making any decisions. Oftentimes stocks like NIO are knocked down in price only to be picked back up at a discount, and I don’t want to be betting against a stock while a six-figure buyer comes in and makes a potential bullish bet.

I’ll be in touch mid-day with updates and a watchlist.

Let me know how YOU do today!

Yours for TrackStar trading,

WANTED! Two Firms Ramp Up Their Interest In Landing Goldman Sachs Advisors (**and open up their checkbooks to prove it)

The Goldman Gold Rush Arrives; As Firm Goes Downmarket Its Elite Advisors Are Being Heavily Courted

Whose Next? As Private Banking Recruiting Ramps Up Which Wirehouse Is Set To Benefit Next

Amidst Pandemic Chaos Big Teams Accelerate Moves To New Firms; We Tell You ...